Everyone has a bad day, tempers often flair and it is easy to strike out when your facing your opponent through a computer screen. The bad news is that a review whipped out in anger can live on the Internet for a long time.

Highland Hardware had an unhappy customer and despite their best efforts to resolve the issue the customer was still unhappy. However when the customer struck out at them publicly, its owner and founder Chris Bagby took action and sending this letter to his customer base: 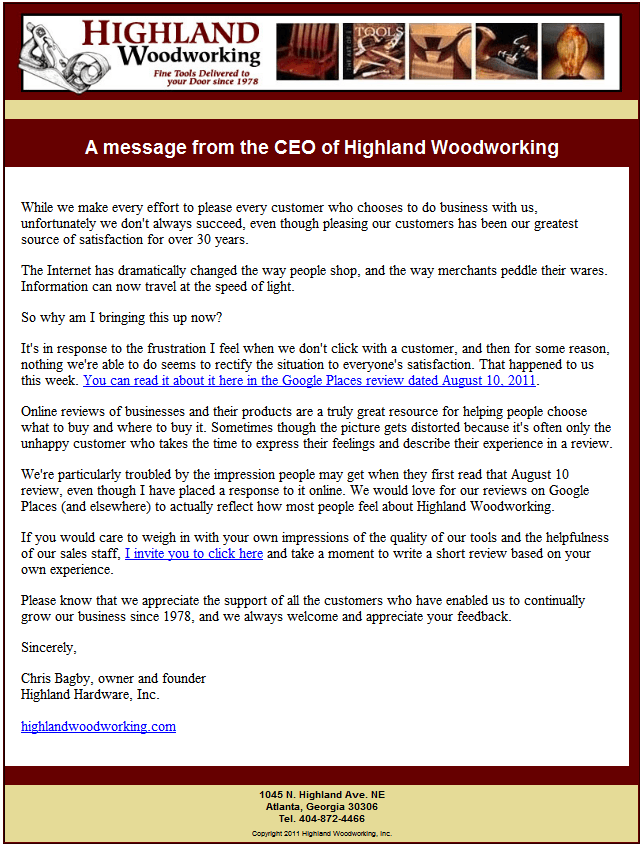 I am on their mailing list and have been a customer for more than 20 years. I have only good things to say about them, both from the standpoint of customer service and the quality of the tools they sell. So when I received this letter, I was only too happy to cast my vote. When I did, it was around noon and there were less than 10 total reviews. When I checked about 5 hours later the number had grown to over 300. Every one I read was 4 or 5 star review and completely burring the bad review.

I think there are a couple of things that here that are of note, first the letter from the owner explains in a frank way what had happened. Second, he invites others to leave a review based on their experience. It is clear from the response that Highland Hardware has a track record among its customers of good service and products that its customers were happy to share.